skip to main | skip to sidebar

These are some pictures I just remembered I had from our zoo trip in August. A bunch of my friends in the area got together and went to the zoo in Washington, DC. 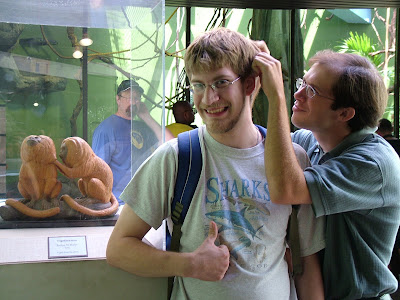 Matt and Chris imitating a statue labeled "Interdependence," or something like that. 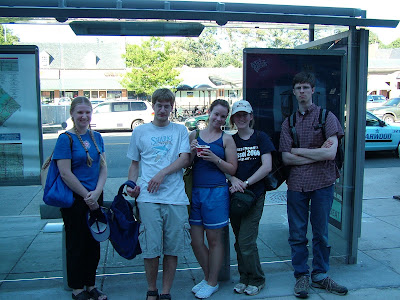 Hanging out outside of Cold Stone Creamery, where we stopped after seeing the elephants and everything. 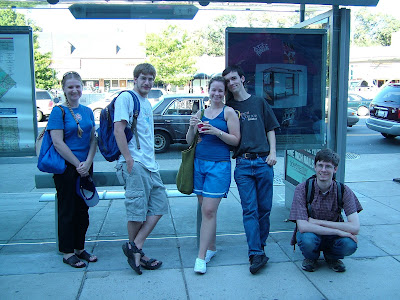 I was behind the camera for this one. We have Betsy, Matt, Syd 'n' Sean, and Andrew.
Posted by Sheila at 1:27 PM 2 comments:

Life as a teacher is so terribly busy! When I'm not teaching, preparing, or grading, I'm chaperoning a dance or planning a club activity. And on the off-chance I'm not doing any of those things, I'm probably at a school volleyball game or being coaxed into going to the Legion of Mary by the other teachers. (I decided Legion of Mary is not going to be something I'm going to do right now ... I just don't have that kind of time.)

I did have time to take a few pictures, though, so I'm just going to post those in lieu of the longer post I would be writing if interim reports weren't due Monday. I have to figure out a grade for every single one of my students, plus any other things their parents should know. I have a lot of students ... something like 120, if you consider a student I have for two classes as equivalent to two students.

Anyway, here are the pictures. 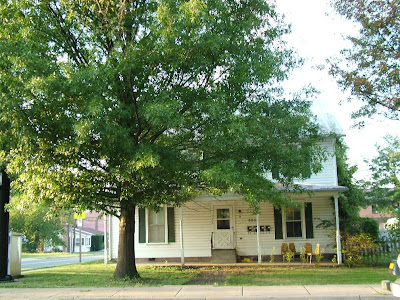 Our house. The door in front is our apartment; I'm rather pleased that the other three apartments have their doors in back. That way it looks like we own the whole house! 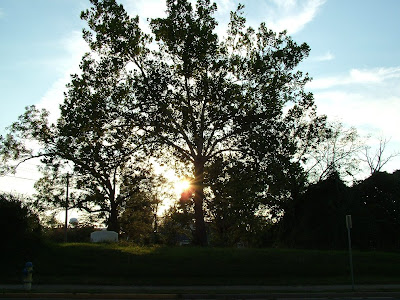 A tree in the vacant lot across the street. I had thought at first the area was a park, but it's not, even though it has a Civil War memorial sign in front of it (these signs are scattered all over town). But it might as well be a park, because it's such a nice bit of grass and trees. 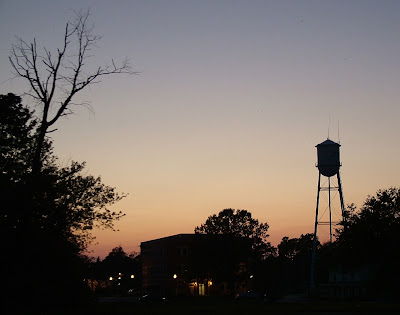 Sunset. I love the sunsets from here. We have to go out of the house and around the side to see them, but they are always lovely. The water tower is a good landmark for navigation, but it also makes a nice silhouette against the sky. 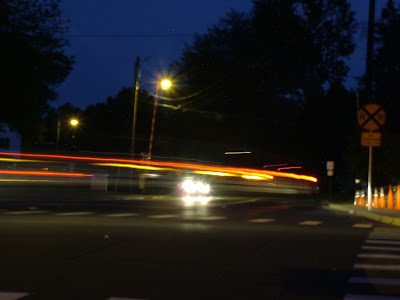 This picture, of a car going around the corner and across the railroad tracks by our house, is the result of some time spent trying to figure out how to slow down the shutter speed. I think it worked really well! I have dozens of pictures like this; I think slow night photography is really awesome.

So, this is it: I made it to my first paycheck. There were times I really didn't think that was going to happen.

Of course, I could not by any means have managed that without help. My family who let me sit around in the house like a lazy bum for two months after graduation ... all the people who gave me graduation gifts (I'd mention particulars, but for fear of embarrassing anyone .... but everyone shocked me with their generosity!) ... the office lady who handed down beds and a chair ... the friends of friends who dropped off a table ... the people at school who told me that whenever I could pay the rent was fine with them ... yes, I've been living very much on the generosity of others. I don't know how anyone starts off after college without the kind of support network that I have.

At any rate, I have groceries in the cupboard and a balance in the bank account, and that makes me happy. But it makes me happier to know that I have dear friends and family I can count on when I don't have those things. I love you all.
Posted by Sheila at 7:14 PM 1 comment:

Sheila
Seeker. Mother. Writer. Gardener. Whoever it's from, this vast universe is a gift and I am trying to say thank you every day.