skip to main | skip to sidebar

I promised a long time ago that I would put up the story of how I got engaged. I'm sorry I haven't done it before, but life has been extremely hectic lately, with a lot of grades coming due, and me being sick. But here it is -- with pictures.


It happened on a Friday when nothing else was going on -- October 17th. John had been talking a few weeks before about coming down that weekend, but he seemed to have changed his mind, so I was feeling a little down. The night before, I had it firmly in my head that he would come after all, but by the time I was at work, I realized I was mostly getting my hopes up for nothing. He was not going to come, and now I would be all disappointed.

During 7th period, I saw I had missed a call from him, so as soon as school was over, I called him back. "Where are you?" he asked. "At school, cleaning the classroom," I answered. "Well, then, call me back when you're home; there's something I want to talk to you about," he said.


So I finished up the classroom and headed toward home. As I was walking out by the front of the school, I saw John sitting there near the parking lot, along with a bunch of kids who were waiting to get picked up. He just looked up and said, "Hi."


He walked along with me toward my house as far as the parking lot, but then started steering me toward his car. "Where are we going?" I asked. "On a picnic," he said.


It was a beautiful drive off to the park he had picked out. The fall colors were everywhere. After a short while we got to the park and got out of the van. He pulled out of the back of the van a picnic basket and his book bag. I took the bag, to free up his hands to carry the basket. He started laughing to himself, but when I asked why, he said it was nothing. (I found out later it was because the ring was in there, and he was laughing at the thought that I was carrying it and didn't know.)


We wandered off along the trails, passing some school kids and a little pond. Then we found a picnic site and got set up. He had everything in that basket: a loaf of bread, a jar of pickles, a tomato, some cheese, some tuna, a knife to cut the tomato, paper plates, napkins -- everything. When John does a picnic, I guess he wants to do it thoroughly. I like that. The sandwiches were great (John does something special with sandwiches -- I think it is because of the fresh ingredients). Then we put the basket aside and decided to continue walking for awhile.


Eventually we came to a clearing by a creek. This whole way I was just babbling about this and that -- the relative merits of Justin Hayward as compared to the other Moody Blues, and my day at school. He was mostly quiet, a little distracted. But when we got to the creek, he sat down on a log beside me. He started to talk a little about this and that, about our relationship and so forth. I thought, "Oh, he's not so distracted anymore; that's good."

Then he said, "I have a question." He had said this a few times along the way, with a few different questions he'd wanted to know the answers to, so I didn't think much of it. Then he slipped off the log and onto one knee. "Will you marry me?" was the question.

John says that at this point my mouth dropped wide open and my eyes got really big. (Actually, he did a pretty funny impression -- I wonder if I really looked like that.) Gathering my breath and picking up my jaw, I said, "Yes, I will," and then started hugging him and laughing and everything like that. At that moment, I do not think I could have been happier. He was happy too. At that point, a train went by on the tracks across the creek, and I waved at the train like I used to as a kid. I thought, "All those people are riding home from work; they don't know that we're going to get married!" Around then, I remembered that I was holding the box John had put into my hand when he had asked the question. "Can I open it?" I asked, feeling like a little kid with a Christmas present. It was beautiful -- very John, but also very me. Not like any old person's ring -- our ring. 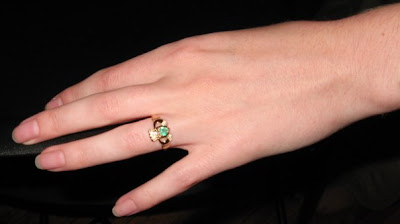 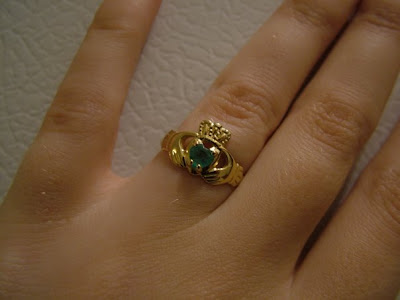 After awhile we walked up from the creek, talking about plans and how we felt and things like that. Periodically I would give a little jump and a shiver, thinking, "Wow! We're going to get married!" John would laugh at me, saying it was unhealthy to be that excited. But I didn't care.

When we got up the hill a ways (where cell reception was better) we started calling people. My own parents weren't home. His mom was thrilled and was very welcoming to me. When we got to the picnic basket, we picked it up and took it to the car. As we were putting it back into the back of the van, John pulled out one last thing -- a bouquet of roses. The ride back seemed even more beautiful than the ride out had been. We passed a church -- St. Clare, my confirmation saint -- and tried to get in to make a visit, but it was all locked. So I made a little visit from outside.


Once we got back home, we bumped into Olivia talking to one of the other teachers in the parking lot. She saw John and the roses, and her eyes got big, because she knew how much I had wanted him to come down, but didn't know he was going to do it. I couldn't help myself -- I held up the ring. She squealed and made a lot of surprised exclamations before running off to buy champagne. John and I went inside, leaving the front door open and standing talking in the kitchen. A moment later the screen door swung open and in walked a priest -- Fr. Thompson. "Heard someone in here needs a blessing," he said. So John and I knelt down and got a blessing. Fr. Thompson left again after chatting for a little bit, calling over his shoulder, "I'll do your pre-Cana, if you want!" He has been looking for people to do marriage prep with.


A minute after that, there was a knock on the door. I opened it to find some of my students -- ninth-grade girls. Fr. Thompson had sent them to ask what was going on. I told them, and they squealed and hugged me. (For about a week after that, I was all the girls' favorite teacher, and they wanted to hear every detail.) Then they went away, and Olivia came back with two bottles of champagne and a cake.


We called up Sean and Andrew, who showed up quickly, and Olivia made chili. Sean had brought another bottle of champagne, which was the only one we got into that evening. The rest of the evening was spent in my favorite way -- food and companionship with friends. Olivia took a lot of pictures. During the evening, I kept calling people and being called by others. John's sisters all had to congratulate me, and I finally was able to get ahold of my parents, who were happy for me. I even got to talk to David! I had them put the phone on speaker so I could talk to Joseph (they were all in the car, and could reach the phone all the way to the back seat). "I want to marry John, what do you think?" I asked. He answered, "Actually, I would really like you to."

So -- pictures of our evening: 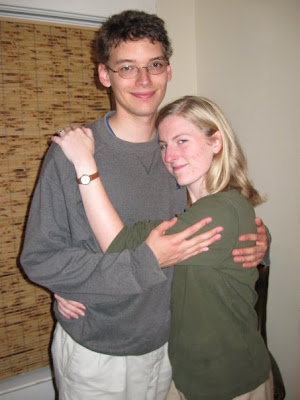 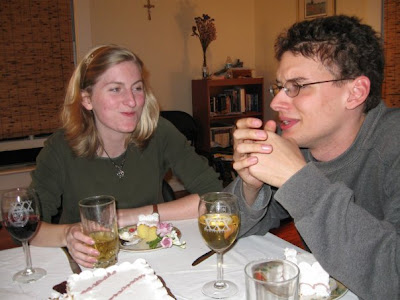 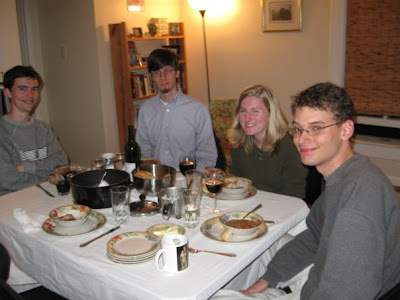 Sheila
Seeker. Mother. Writer. Gardener. Whoever it's from, this vast universe is a gift and I am trying to say thank you every day.